I normally run it with the x64 version of the game and I tried using Legacy Edition (x32 mode) too but it would still stop at activation ul.exe from what I can tell in Task Manager.

(Below is a example of what i'm facing; the game simply does not launch when a d3d9.dll is in one of the bin folders.) 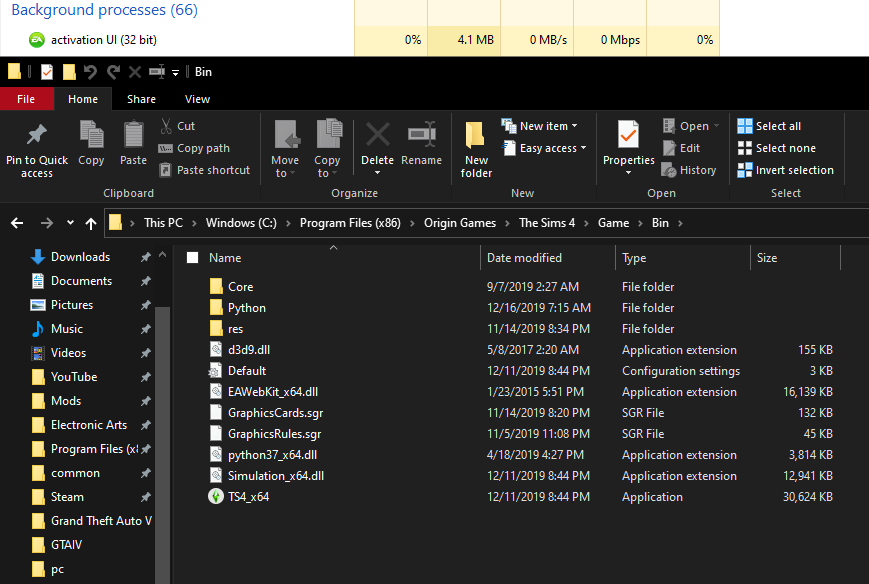 I'm also using the latest version too, so there is no 32 bit or 64 bit versions of ReShade for me unless if it's hidden somewhere on the website or if I have to use a older version.
01 Jan 2020 10:41
Replied by Mahogny on topic The Sims 4 doesn’t launch

(Thank you for being the first person to reply) Unfortunately one of the solutions did not work for me.
30 Dec 2019 09:02
Replied by Mahogny on topic The Sims 4 doesn’t launch

Does anyone know any possible solutions to The Sims 4 not launching and Saints Row IV/The Third crashing while loading the game? I posted two separate topics about this about a month ago and nobody responded to it. I found a temporary solution for SRTT by switching to DXD9 mode (it also fixed the refresh rate). If you want more info, you can head over to my topics via my profile: reshade.me/forum/profile/14064-colbydash
19 Dec 2019 02:25
Replied by commandocoki on topic Sims 4 Issues

I posted about this a week ago with no answers so I wouldn't except any tbh. Min was for sims 3 but obviously sims 4 is having issues too.
it sucks and I'm probably going to stop using reshade...but at least its good to know its not just me!

My post is one before yours about the sims 3. It reshades in the upper left corner and there is literally no fix that I know of and 6 days later no response :/ You can keep restarting it but other than that I have tried literally everything known to man and nothing works.
16 Dec 2019 22:49
Newest Version not working for sims 4 was created by lovely58522

So I recently downloaded the newest version for reshade (4.5) for the sims 4. I had been using the previous versions without a problem, but since updating I am experiencing some issues. I am only able to open up reshade once when starting the sims, I get the banner at the top telling me reshade is working, I open reshade, select my presets (even tried to create my own), and it starts off okay. Until I load into a world. The reshade only appears in the upper left hand corner of the screen, the rest of the screen looks like the plain boring colors of the sims. Then when attempting to open it in game the game pauses as if it's opened but the box doesn't appear. I can include screenshots if need be, I genuinely love playing with reshade, it makes the game so much brighter, but I can't and have no idea how to fix it. HELP!
15 Dec 2019 21:02
Replied by ryanleeoliver on topic Sims 4 Issues

I've been using Reshade for Sims 4 without an issue for a long while at this point. I'm not well versed in how to tweak settings, but I did do my fair share of research trying to figure out how to fix this myself.
I updated my game with the newest patch and updated Reshade as well.
After that, when I zoom into a household, the effects start to flicker and only cover a square of my screen. The square gets smaller and bigger depending on which way I turn the camera.

The next update is around, with big improvements to the Vulkan backend, effect compiler and the GUI. Not to mention better performance in DX12/Vulkan, improved depth buffer detection in DX9 and DX12, display of preprocessor definitions as variable widgets and new options for shader developers to customize how settings should be displayed in the GUI:

4.4.2.700
Sims 3 on windows 10
This applies to all dof shaders.
They work for about 5 minutes, then focus on a small square point in the corner.
imgur.com/a/EmG0vy6

I see this complaint listed around but no solutions.
I am interested in knowing what I am doing wrong, and why it happens.
07 Dec 2019 23:45
Replied by crosire on topic Reshade on the Sims 4?

[SOLVED] Reshade on the Sims 4?

Disable Origin in-game overlay. There are tons of topics on this, use the search next time please.
07 Dec 2019 16:56
Reshade on the Sims 4? was created by cutcorners

[SOLVED] Reshade on the Sims 4?

Hello! I was using Reshade for the Sims 4 until my computer updated, which broke it. My camera in-game spins around wildly when I try to move it. I waited for a new update for Reshade, and I just tried the November 6th version, but the same problem occurs. My computer runs DirectX 12, but the game runs DirectX 9. Could that be the issue? I see people online using Reshade with the game just fine, so I'm just wondering if there's anything I can do to fix the issue.

I downloaded the Sunflower Syrup preset for Sims 4 and in game it looks like this? This is my first time with re-shade so can anyone help?
imgur.com/IMj6prK
05 Dec 2019 04:55
Uninstalling Reshaders was created by juliaalawson

I installed one of crosires reshaders for Sims 4, but its too much for my game to handle. Does anyone know how to uninstall it?
27 Nov 2019 08:54
Saints Row The Third and 4 Directx problems was created by ColbyDash

If you read the topic’s title, then just hear me out instead of saying anything first. I know it sounds like a beginner’s mistake but it isn’t. I seem to have an issue with getting the games to load into the in-game world. I can switch into Directx 9 as a temporary fix (this also works for fixing the refresh rate too) for SRTT but there’s no option such like that for SR4. Unfortunately I couldn’t find anything that helped me online and installing the Directx 10+ version of Reshade doesn’t work either for the both of them as it’ll still crash while the game tries to load into a save game. It also seems to crash when trying to apply new graphic settings from what I seen in SR4. I’m having a similar issue with another game in another topic I’ve created: reshade.me/forum/troubleshooting/5989-the-sims-4-doesn-t-launch Someone please help me as I’m clueless about what to do next here too.