The topic has been locked.
Less More
5 years 1 month ago - 5 years 1 month ago #62 by Marty McFly
Replied by Marty McFly on topic Marty McFly's Ambient Obscurance (MXAO) with IL
Warning: Spoiler!
Dude, I simply don't have the time to find (and test) a way to integrate it in the Framework. I personally never used the Framework hence I have little knowledge of how things work inside it and what could be possibly broken with my edit. I never use my shaders or any other ones. I write them, release them, that's it. I can work on my things 2 hours a week, there are no miracles possible.
Also, because I want to add MXAO the regular way and what you ask for is some dirty cut'n'shut edit I extremely dislike what's going on right now. The AO is released as a standalone so people can test it before I add it to the Framework (the right way). Why I take my time for that is simple: I learned a lot about AO when I worked on MXAO so I can improve all existing AO shaders quite a bit which means rewriting the whole AO code and that requires a whole lot more time than I can afford at the moment. Same thing I did with the Advanced DoF - something that also took its time.
You quoted some instruction by Genrix which you tried - and failed. That tells me that you have no knowledge about shaders at all (which is totally ok by the way, but don't aim too high then). This is by no means a simple thing that can be learned in a week or so. Are you expecting me to teach you enough of an exotic programming language with math probably years ahead of your school education level to edit a big ass project as the Framework by yourself? Sure, for the integration there is probably nothing actually shader code related necessary but you still need a feeling what's going on in the structure to know what you are doing, otherwise you can just blindly test things and hope it works by luck. Pushing an update soon-ish, I improved the bilateral filter a tiny bit to improve performance, the AO falloff formula changed a LOT so the sampling range is used better. Side effect that radius 5 looks like radius 15 to 20 now but settings with same visual result before / after run a lot faster. So old radius 15 runs a lot slower than new radius 5 despite looking largely same. Also I've changed the IL calculation formula so IL doesn't get killed away by AO anymore so bright objects cast their light, no matter how strong the occlusion is.
Last edit: 5 years 1 month ago by Marty McFly.
The topic has been locked.
Less More
5 years 1 month ago #66 by Quentin-Tarantino
Replied by Quentin-Tarantino on topic Marty McFly's Ambient Obscurance (MXAO) with IL

NotWorthy wrote:
I'm a fan of "in your face AO" so I went a little frivolous with the settings - also I colorized the the shadow output because a) i like colors b) to make Marty cringe at the sight of someone basterdizing his awesome shader so much. (and it is aweomse)
Thanks again Marty for this great gift to the community. So many games to replay with this.

Change the sky colour in the Timecycle so it ain't green
The topic has been locked.
Less More
5 years 1 month ago #67 by Marty McFly
Replied by Marty McFly on topic Marty McFly's Ambient Obscurance (MXAO) with IL

Marty wrote:
Colorized AO isn't that bad, but take care to apply the colorization before the AO fade out because as you can see, the sky color is affected.

The topic has been locked.
Less More
5 years 1 month ago #68 by NotWorthy
Replied by NotWorthy on topic Marty McFly's Ambient Obscurance (MXAO) with IL

Marty wrote:
Colorized AO isn't that bad, but take care to apply the colorization before the AO fade out because as you can see, the sky color is affected.

Actually I made it fade out to green on purpouse because I felt the color of the foliage is greatly underrated in most presets and I didn't exclude the sky cos green sky be trippy.
Here's the code I used:It would be nice if your final version of AO included some form of colorization Marty - for one thing you'd save noobs like me the embarrasment of coming up with blasphemously ugly pseudo-math code that is an afront to the almighty god of gamma-correction. I just throw around random numbers until the effect doesn't make my eyes bleed. Take pitty on my eyes - add a PRoper colorized shading option in MXAO

Marty wrote:
Colorized shadows is a nono, sorry. AO itself must be grayscale. And the colors come from IL anyways.
But if you really want it, how about:

instead of the regular AO apply code.

I didn't like your green tint code, but I did like the way you apply color to the image so here - the best of two worlds: 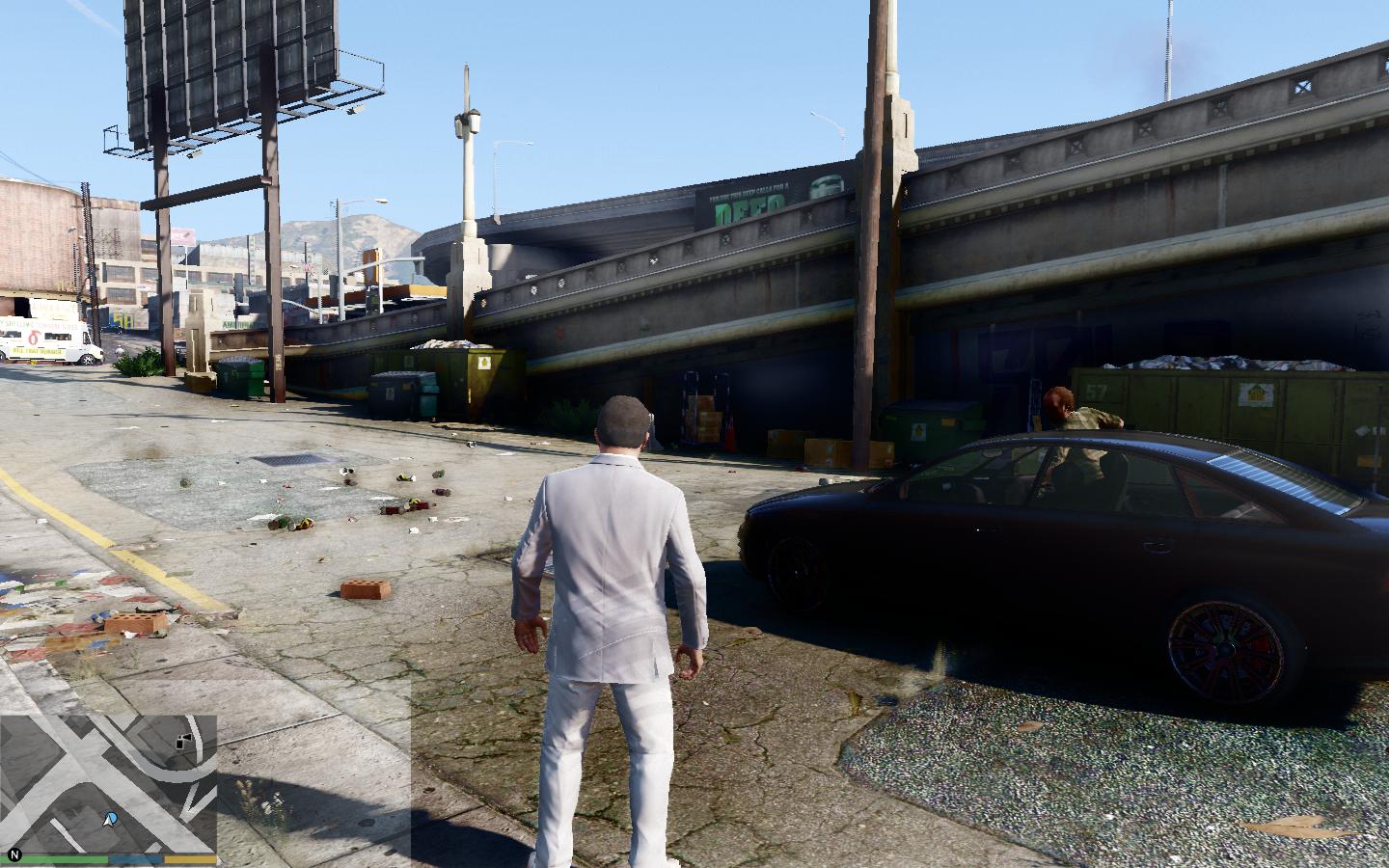 And in this context I have two questions for you:
1) Any idea how to remove/decrease the bigger rectangle around the minimap thats not passing a valid depth buffer for the AO to work?
2) Would you allow me to offer my color version of your AO to the gta5-mods.com community in any of these forms? :
- Publishing a modified version of your MXAO.h with my code added crediting you as the original mastermind and me as a simple code adder
- Publishing your unchanged MXAO.h with credits to you and instructions how to change it to get the color effect
- Linking to VisualV to get your AO file and adding instructions on how to modify it to get my effect

MXAO is a labor of love i see that so I can't blame you for wanting to protect all the praise you deserve for it but if any of the scenarios work for you please let me know which.

I'm also working on a mod that displays the GPS color route right on the street in front of your car - but i needed a couple of your functions for it to make it work - like the depth buffor calibrating and getting normals from the depth buffer - would it be okay for me to publish my mod with your functions assuming i would credit them as being developed by you?

THANKS and rock on your awesome shader booty

Marty wrote:
But err, how could my functions help you with your gps mod?? It cannot be a shader so how and why did you use my stuff? O.o

Probably this method isn't that elegant, but it simple and works just fine.

A guide for Reshade1.1 and 2.0 works just fine in DL:F and Fallout4. If it doesn't work for you, try to disable any overlays, such as Fraps, MSI AB and you should disable MSAA as well.
Last edit: 5 years 4 weeks ago by Genrix.
The following user(s) said Thank You: SSSekky
The topic has been locked.
Less More
5 years 3 weeks ago #75 by NotWorthy
Replied by NotWorthy on topic Marty McFly's Ambient Obscurance (MXAO) with IL

Marty wrote:
Or do you upscale the navigation system route of the minimap?

Now i know this effect is easibly achieved and can be done better by a faster coder than myself - so all i ask if anyone picks up on the idea to keep me in the loop - i'm not releasing the code yet because it's not yet tweaked to work with every resolution.
The following user(s) said Thank You: crosire, DeMondo
The topic has been locked.
Less More
5 years 3 weeks ago #76 by Scorpio82CO
Replied by Scorpio82CO on topic Marty McFly's Ambient Obscurance (MXAO) with IL
MXAO in DX HR works!!

I probe any AO shaders and flags for this game..only works with nvidia inspector flags but partially good
but.. i probe this in dx but is weird....works only when i have paused the game, but its perfect!!.. Mr MC Fly..there are anything to do to work completely..??? i hope to found some clue for you... with games where deph buffer does not show..

in game shot, in game AO off but MXAO on not showing Marty wrote:
@everyone: I might push an update for MXAO tomorrow.

-changed the falloff formula so the samples are now better used. This has the side effect that AO radius looks now much larger, 1.0r sample radius of say 10.0 has same visual result of 1.1r with sample radius of about 3-4. However settings with same visual result run faster now, especially noticeable for large scale AO.
-changed the blending formula, AO does not kill off IL anymore and vice versa. I think these screenshots show it very well. I didn't use the best scene but it should show that the white door now illuminates the rest while on the old AO code, the IL gets killed away even though I use a stronger IL setting. 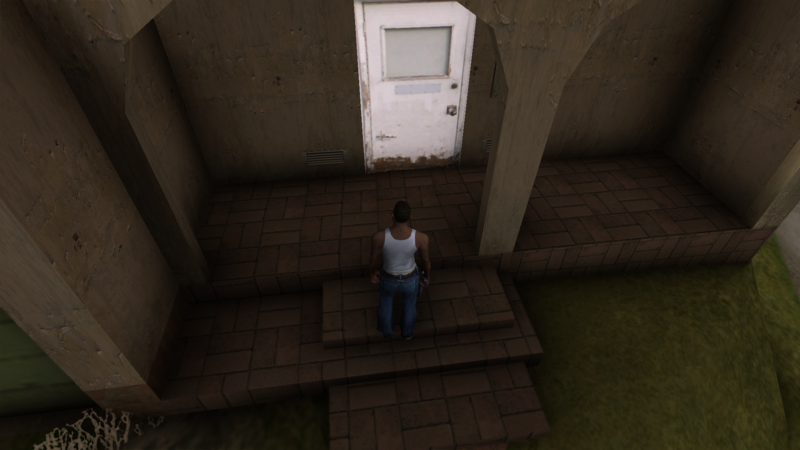 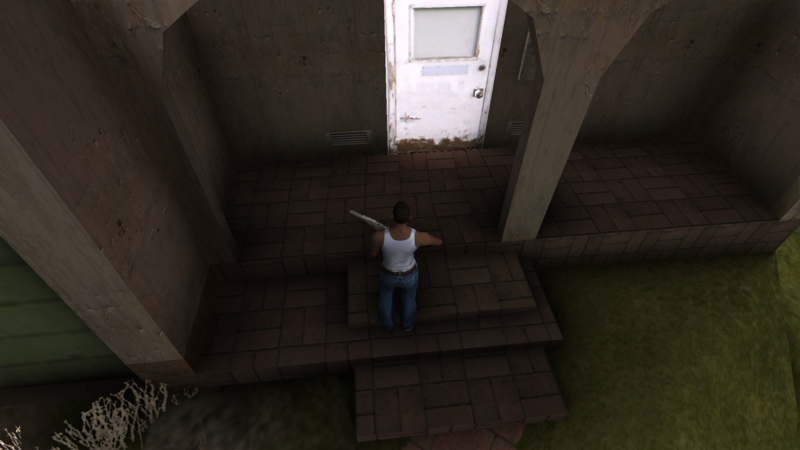 -changed the smart sampling formula. Now the far areas don't have a ridiculous low sampling amount anymore which made lower end settings flicker in far areas because you had like 4 samples
-changed the sample distribution a tiny bit so the AO looks better on low sample count.
-changed the sample randomization code for both better sample distribution and less noise so it doesn't need so much more blurring than before. On low sample counts the AO shadowing keeps its shape now, the old code diffused it away.
-tiny change in the AO blurring (actually I just increased the offset) that makes blur smoother now by a small margin
-small fix that reduces the z artifacts with low precision mode almost to 0 so there is no real reason anymore to use high precision
-simplified code of blur tap detection, might improve fps by a little margin but I doubt it will be noticeable


DOWNLOAD
Last edit: 5 years 3 weeks ago by Marty McFly.
The following user(s) said Thank You: SpinelessJelly, CUBER, Elimina, DeMondo, Golgotha, piltrafus, Genrix
The topic has been locked.
Less More
5 years 3 weeks ago #80 by piltrafus
Replied by piltrafus on topic Marty McFly's Ambient Obscurance (MXAO) with IL
I haven't tried it yet but I wanted to thank you for your continuous and generous contribution. The first iteration of MXAO is really great. Unbelievable quality for the low FPS impact it offers. Hats off. And thanks again for just sharing it openly.
The topic has been locked.
Powered by Kunena Forum