I play Final Fantasy XIV and just wanted to let you know that I tried upgrading from 3.0.8 to 3.3 and lost the ability to use the ' key.
On the 3.0.8 I can use ' but not ^, unless I spam press it until it randomly works. Upgrading to 3.3 or any of the other 3.x releases has the same effect but on the ' key instead, and it looks even worse because the key won't work even after numerous presses.

This is actually a FFXIV bug, has nothing to do with ReShade. I even contacted support for it. I still don't know why exactly it switches from ~ key to ^ key but in general it has to do with the fact that you have a United-States-International keyboard layout. A different layout won't have the requirement to press space after pressing shift+6 as an example and will instantly show the character.

For these keyboard layouts things like ä, â, ã aren't possible quickly, that's why I don't use it. I kinda like pressing space after such a character, I'm used to it I guess.

One thing regarding the switching, I somehow got it back to the ~ key by a lot of different nonsense. With switching and "uninstalling" keyboard layouts to tons of different stuff. No idea why it suddenly switched back. However, I never uninstalled ReShade during that testing period and it still switches back (and forth unfortunately)

Derbrent wrote:
Where can I find a detailed description of all the functions?
RUS: Где можно найти описание всех функций ? 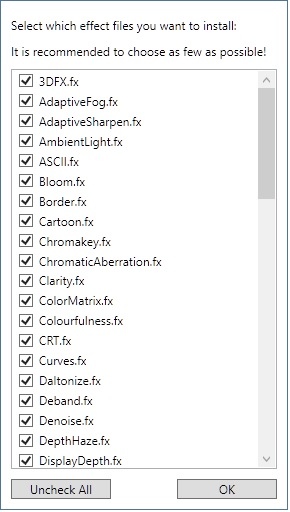 x8009 wrote:
Can anyone explain me why reshade sometimes takes Pink screenshot ? the whole PNG or BMP is just PINK static color. Or just a 75 KB file . it happens in many games.. I don't know what is causing this.

I think that's a full 10-bit frame buffer issue and ReShade currently not supporting more than 8-bit so games such as Alien Isolation where you can toggle "Deep Color" could be used to confirm this by taking a image with this option disabled, enabling it, restarting the game just in case and then taking another image.

Newer game engines with HDR support would probably be especially susceptible to this issue if that's what it is.
Guessing some games like Koei Tecmo's or Unity using a full SRGB frame buffer might have some issues as well but it seems minimal, earlier versions of ReShade occasionally had a very blown out brightness or gamma display for the ReShade menu in these types of games.

EDIT: Hmm but from the fork menu on Github it seems HDR support is going on in another branch of the software, neat.
github.com/crosire/reshade/network

github.com/Pyromuffin/reshade/commits/master
Last edit: 3 years 3 months ago by JBeckman.
The topic has been locked.
Powered by Kunena Forum