Less More
5 years 3 months ago #1 by Martigen
Revisiting Optimal Effect Ordering - Discussion was created by Martigen
So, one of the wonderful things we can do now thanks to Reshade 3.0 is seeing the effect in real-time of effect ordering.

I hope this thread serves as a starting point, where we can combine the knowledge of everyone testing Reshade to work out a Grand Agreed Optimal Effect Ordering (GAOEO -- Ok we need another acronym, that one sucks)

Anyway, you get the idea. There is the old 'pipeline.cfg', but a chunk of SweetFX's shaders were bundled together in 'Shared', Ioxa's shaders like Clarity and Highpass weren't included, and others (in my experience) might be better ordered differently (like HQ4X further down the chain, back when I was using it)

A good example of breaking down the old Shared shaders are Curves and Vibrance, which I think work better at the end of the chain, but in the old pipeline.cfg were much higher up due to the other shaders bundled into Shared. DPX, when it gets added, will definitely benefit by being able to move more independently than it was when bundled up in Shared.

So post your testing/experience or, if you're a genius like Marty or Ganossa or Ceejay, your knowledge on which order effects should be processed and perhaps we can build a definitive recommended guide -- possibly also, I presume, something that Reshade can later use to automatically order for 'best case' if such a feature comes along.

In my testing tonight with Firewatch and a selection of effects -- and after much, much dragging effects around to see the impact in real-time -- this is I think a good starting point: Some of these are surprising, like Colourfulness, but I was getting artifacts when this was placed after either of SMAA or FXAA. Similarly, it took some experimentation to find (what I think) was the best ordering of Bloom, Clarity and Ambient Light since they all had an effect on each other.
The following user(s) said Thank You: Genrix, CrazyCat, Sunesha, master2g, romulus_ut3

Less More
5 years 3 months ago #2 by Sunesha
Replied by Sunesha on topic Revisiting Optimal Effect Ordering - Discussion
I gonna experiment tomorrow. Especially that you pointed out that Colorfulnes may give artifacts. I experienced some artifacts with MXAO. I thought the effects was still working with the pipeline.cfg

So if understand this correctly, I just drag and drop the shaders and they will layered in this order?

I did some more testing on Firewatch, and it's definitely better in the load order I had above. I think FW has some AA on by default (and can't be changed) so perhaps that has something to do with it. I am however currently testing in XCOM2 and again sharpening before AA creates cleaner lines, but it's marginally different compared to FW. I'll get around to uploading some screen shots later.

And that's the thing, the more input the better we can determine optimal orderings (thought of course it may also be game dependent... )

Less More
5 years 3 months ago #5 by Sunesha
Replied by Sunesha on topic Revisiting Optimal Effect Ordering - Discussion
I got curious about putting sharpness before AA. I did not really like it. I think the details look weird. Especially in spots with high frequency of detail. I suspect both taste and settings in the sharpening matter. I usually set my sharpening down to you don't notice that been processed.

Also in this cases, What looks good on screen may not do so on another. As size and color changes a lot.

Less More
3 years 8 months ago #6 by SurfNSlide
Replied by SurfNSlide on topic Revisiting Optimal Effect Ordering - Discussion
I know this is kinda of an old thread, but I'm a newbie doing all the reshading stuff and wanna learn it.
Especially interested if there maybe exists a summarized list somewhere for this as of now? I couldnt really find anything.

Anyway, regarding your list above, I also read from the docu that MXAO should be top of the list, but wouldnt it make sense to put ambient light even before, since it would affect the results AO produces significantly?

Less More
3 years 8 months ago - 3 years 8 months ago #7 by Marty McFly
Replied by Marty McFly on topic Revisiting Optimal Effect Ordering - Discussion
Things like SSAO need to be as early as possible, before any bloom and stuff. Ideally SSAO happens even before the whole image is composited (before ReShade itself) and is used as a mask for ambient light (occlusion shadows in broad sunlight are unrealistic but in areas where no direct light is present they make sense). Ambient light is bloom and since it adds a haze over everything it'll screw up MXAO results. Don't confuse the Ambient Light shader with ambient lighting. The name is very wrong and the shader adds some sort of bloom, lensdirt and adaptation. Ambient lighting is all diffuse lighting that doesn't come from a direct light source, like the diffuse shadow under a vehicle already parked in a shadowy area is a AL shadow that should be done by SSAO. So if the AL shader did what its name suggests, you would be right.

Anything that does some sort of blur needs to be after AO, try putting DoF before AO and see how it looks.
From my experience, there's no such thing as a correct order. Some stuff needs to have a specific relation though.

-MXAO as early as possible

-AA before sharpen, both very late, as further contrast increases will cause artifacts otherwise

-bloom, ambient light etc very late, maybe even after AA/sharpen as they don't introduce any new kind of aliasing

-DoF before AA/sharpen as it requires pixel values of depth and color to match (blurry AA will leak colors into areas where it's not supposed to be) and sharpening blurred areas looks weird. Also before bloom, it just looks better when bloom is applied on DoF areas

Bottom line, there's no way to give a fixed order for the entire shader repository but you can order shaders in a logical way, but most of the time there is not a singular best way. The order in which curves, tonemap and other color graders are applied for example will affect their outcome but that's just how it works. Ideally you use as few as possible.
Last edit: 3 years 8 months ago by Marty McFly.
The following user(s) said Thank You: conan2k, Ryukou36, Viper_Joe, Chilace, SurfNSlide 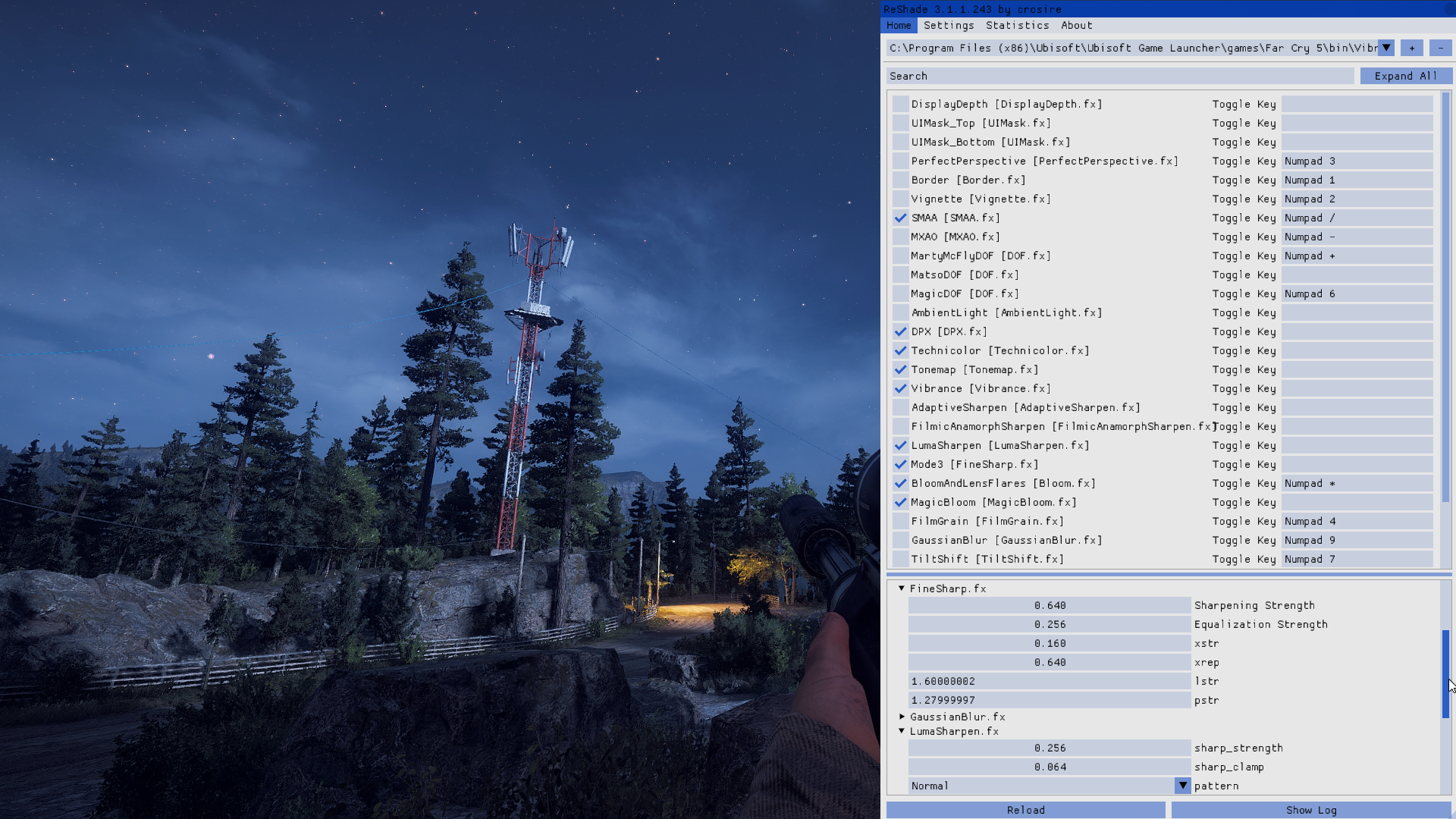 EDIT: Ofc MXAO is before SMAA, not that it matters here, but in general

And no, Im not going to use them all.. ^^ rather trying to achieve a reasonable sorting of the ones I'm considering to use/try out at all (for now)

-DoF before AA/sharpen as it requires pixel values of depth and color to match (blurry AA will leak colors into areas where it's not supposed to be) and sharpening blurred areas looks weird. Also before bloom, it just looks better when bloom is applied on DoF areas

Am I stupid or wouldnt this mean, DOF needs to go after AA & sharpening?

That part I also don’t really understand, why would I get bloom from this?
I had to move those down after MagicBloom anyways, since otherwise I had the bug of effects not being applied when I close the ReShade window...
Last edit: 3 years 8 months ago by SurfNSlide.

1. UI Mask top.
2 or between 5 and 6. AA(Anti-Aliasing) - Contrast-based AA like SMAA finds aliased edges better when put before AO. AA should be placed after DOF(#5) IF you're using DOF, to avoid bleeding between in- and out-of-focus pixels.
3. AO(Ambient Occlusion) - Shadows subtract from image and should never bleed over lighting.
4. Lighting Shaders(GI and the likes) - Early in the stack so other shaders use data from the lighting.
5. DOF(Depth Of Field)
6. Bloom - After DOF, because it simulates light bleeding across a lens.
7. Tonemapping(only if HDR) - After Bloom to remap the resulting HDR (if Bloom isn't LDR).
8. Color manipulation(LUT, Contrast, Saturation, e.t.c.) - Last or close to last in the stack, for final adjustments to a finished image.
9. Sharpening - After color effects for better local contrast sharpening.
10. UI Mask bottom. - Can be placed before sharpening and/or color effects if you want the UI to be affected.
Last edit: 8 months 1 week ago by Arsonistic.

Less More
8 months 1 week ago #11 by canceralp
Replied by canceralp on topic Revisiting Optimal Effect Ordering - Discussion
Would you guys please tell your opinions about this order? I have my thoughts below but all the advises here suggest I should go with 3-1-2, which renders 2 obsolete.

Here is how I thought:
Both Sharpening and Golor grading can cause (or increase) banding. This is why I'm using film grain. It is a substitute for dithering and cheaper than Deband. So, Film Grain before Color grading.

Sharpening is another story. It can't be placed after Film Grain or Film Grain is also sharpened and looks unnatural.