I would like to create a preset similar to the one

First time I post here, I do not have too many difficulties to create presets ReShade it's been a long time since I create, sometimes I do good things sometimes it's means, I started already since the SweetFX version 1.5 ect ... And now ReShade tool that I love a lot and I wanted to thank the authors and creators of all these Shaders, it is remarkable.

In short, there is a YouTube channel that I discovered not long ago and it is the most beautiful ReShade I've seen: www.youtube.com/channel/UCPF4-nJKvSCKt6VnphtFJ-g/videos
Of course (not to change anything) he does not share his presets, and I ask him a few questions to know what he uses, the effects, luts, but he still has not answered me, and so I fell on a video where he created a beautiful preset on AC: Origins
I love ... The colors, the tones, the natural ...

Apparently it uses ReShade 2.0.3, but I prefer to use ReShade 3.10 which prevents me from doing ALT + TAB, but before you tell me, I have more or less all Shaders to wear (I found packages ported to version 3.0 of reshade) so I compared and I have all the necessary shaders like version 2.0. (I even have the "Pirate Shaders" which are not in the version 2.0 of ReShade, a screen here: imgur.com/a/niVrb

Now here I tried since yesterday to recreate the same colors as him with dozens of compilations of tests, and different effects (even with lightroom.fx) and I can not get the same result as him! It becomes even frustrating, He happens to have a tonemap a little pink with palm trees very green, even with "filmicpass.fx" I have not at all the same, and yet I know all the effects ...

So I started to wonder if he does not use color palettes "LUT" which seems to me more than likely, but as I'm a noob with Photoshot / Gimp or other retouching software, I tried to find packs of LUT on the internet (Witcher 3 / Fallout 4 ...) but there are not many and I do not have the same results at all.

If only I knew if he uses LUTs or what main effects he uses ...

Here I am losing hope, how to do? I love his preset and I do not even play the game since I saw his video

And sorry for the pavement I needed to explain in detail
Last edit: 4 years 4 months ago by Jules.Benedito.

Play around with the curves tool in gimp for an hour. That's all you really need. 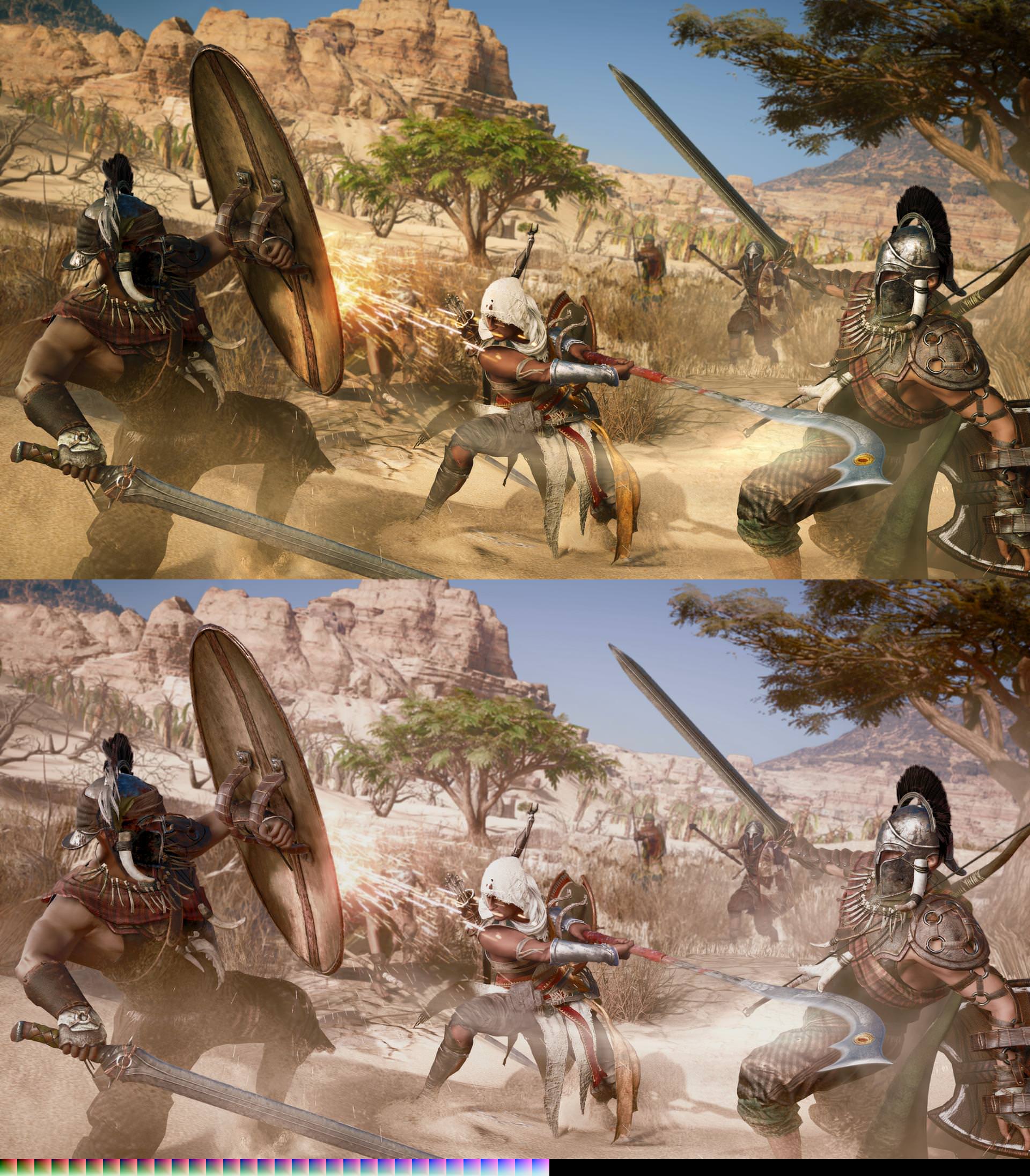 Curves - Lowered max white point. Boosted shadows quite a bit. Lowered green's midpoint slightly (adds magenta to the midtones).
Set saturation scale to 1.2 in preparation for the next step
Made a new white layer, set mode to "Saturation HSL", and added a mask. Pasted a greyscale copy of image into mask. This controls saturation based on the image lightness/lumincance (whatever you desaturated with). Edit the mask with the value curve to fine-tune this (I didn't for this example).

To do the same thing without a lut, you'd probably have to do something like...
Lower green below 1.0 for "gamma"[?] (The middle one) in liftgammagain. Maybe lower it in lift and gain to a degree, too.
Use levels to lower the max white point.
For that saturation effect..... lower vibrance and raise saturation? Idk. One of the other weird shaders might do it better.
And for the lightness, just raise all the values of "lift"[?] (the dark one) over 1.0 Maybe raise them for Gamma too
-Going entirely off of memory. I don't have the color correction shaders installed anymore since I use luts.

Notes:
-I'm not the biggest fan of this look (I prefer max range and neutral colors over crushed whites and tinting for "realistic" games), and as such didn't spend much time on it. It's just a rough estimation based off of the video thumbnail.
-I'm also just using a picture off of image search, so it may need tweaking to not adversely affect other parts of the game.
-Also also, imgur converted that to a .jpg, so you *might* not wanna use the lut at the bottom in case it has compression artifacts.
Last edit: 4 years 4 months ago by FierySwordswoman.
The following user(s) said Thank You: Jules.Benedito

I looked at all your explanations with and without LUT, actually it's difficult to create the same thing without LUT, I tried with shaders "Lightroom.fx" and I got some good results, but I do not not happen to get the tones a little "fade" like him.

I'm motivated to try to create a custom LUT, but I've never used any editing software, I just downloaded GIMP, but how do I change the LUT by running a screenshot of the game for see the changes directly? It's possible ?

If I understand correctly, today the best thing to do is to create a LUT to have the final rendering approximate and then to "tweak" with some effects

Thanks again for your help mate, and sorry for my english

""Set saturation scale to 1.2 in preparation for the next step
Made a new white layer, set mode to "HSL Saturation", and added a mask. Pasted a greyscale copy of image into mask. This controls saturation based on the image lightness / lumincance (whatever you desaturated with). Edit the mask with the value curve to fine-tune this (I was not for this example).""
Last edit: 4 years 4 months ago by Jules.Benedito.

Less More
4 years 4 months ago #6 by Jules.Benedito
Replied by Jules.Benedito on topic I would like to create a preset similar to the one
It will be really great! You can send me the link.
But I really do not know how he did to get those colors ...

--Removed the music playing in the background because it got blocked in the US, which is where I'm assuming you're from. It only claimed one song and none of the others, so the deadlock failed.
Final product:

Anyway, that art style is far from what I normally do (you can probably se my unsuredness in the video). Here's how *I'd* go about tweaking AC origins using those same two pics I found on image search:
Warning: Spoiler! 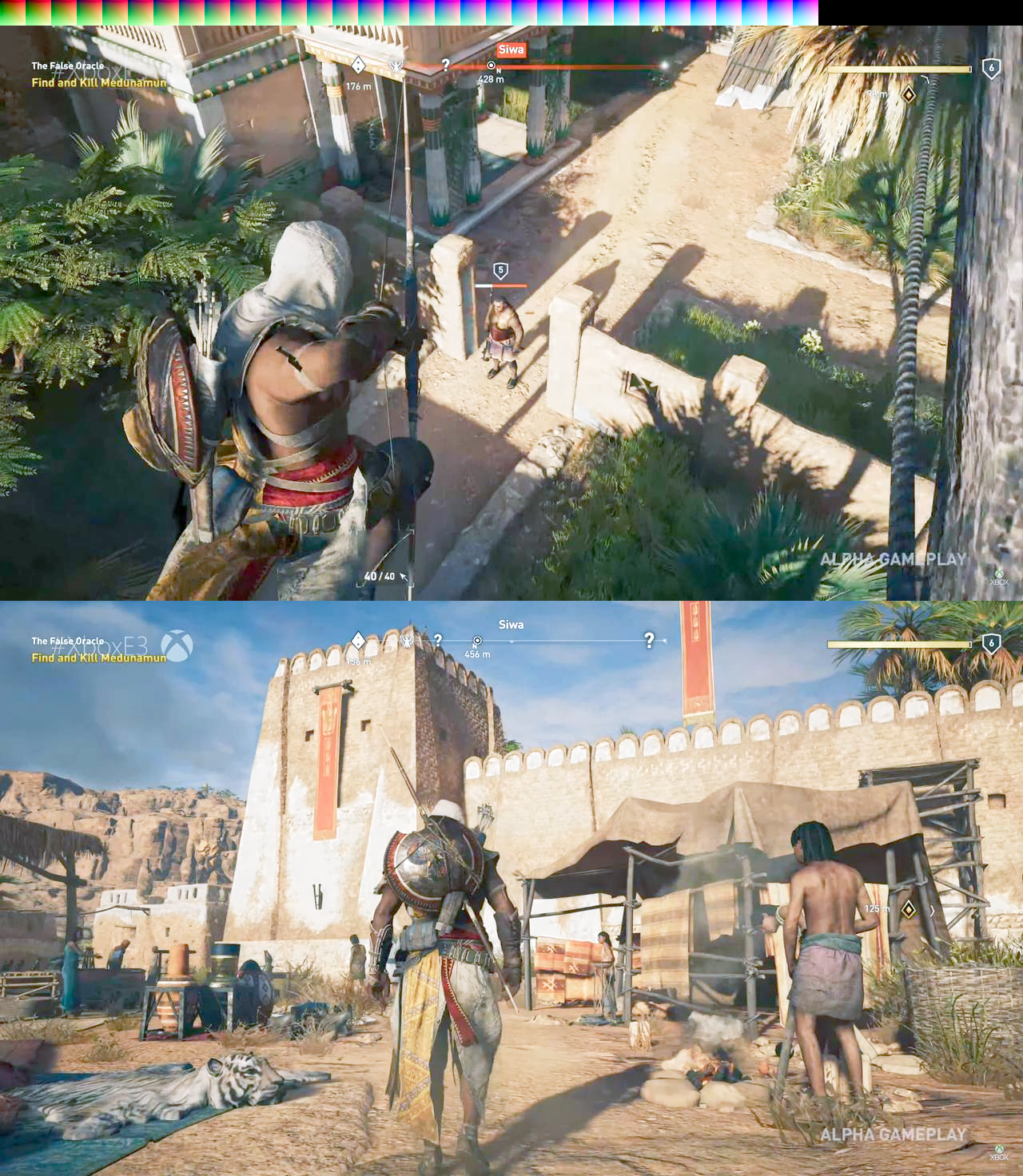 I showed more or less how to do most of this in the video. Only thing I didn't cover fully was white-balancing.
Last edit: 4 years 4 months ago by FierySwordswoman.
The following user(s) said Thank You: mickdekkers