Less More
3 years 2 months ago #1 by SamHammich
eduke32 Build Engine text+sprite draw issue was created by SamHammich
Been lurking for weeks, first time posting, sorry to say it's with a problem.

Issue: some text, most sprites, and occasional textures on models are not being drawn correctly. The perspective seems severely distorted as though stretched or smeared vertically.

The issue remains whether the post-processes are active or not, and after deleting the ReShade files from the game folder entirely.
Confirmed this issue does not appear on a clean install of the current version but appears after injecting ReShade.

I also tried running this version of reshade with Duke Nukem 3d on a different version of eduke32 and reproduced precisely the same problem.

Aside from this, there appear to be no other visual issues. Any idea what could be causing this? 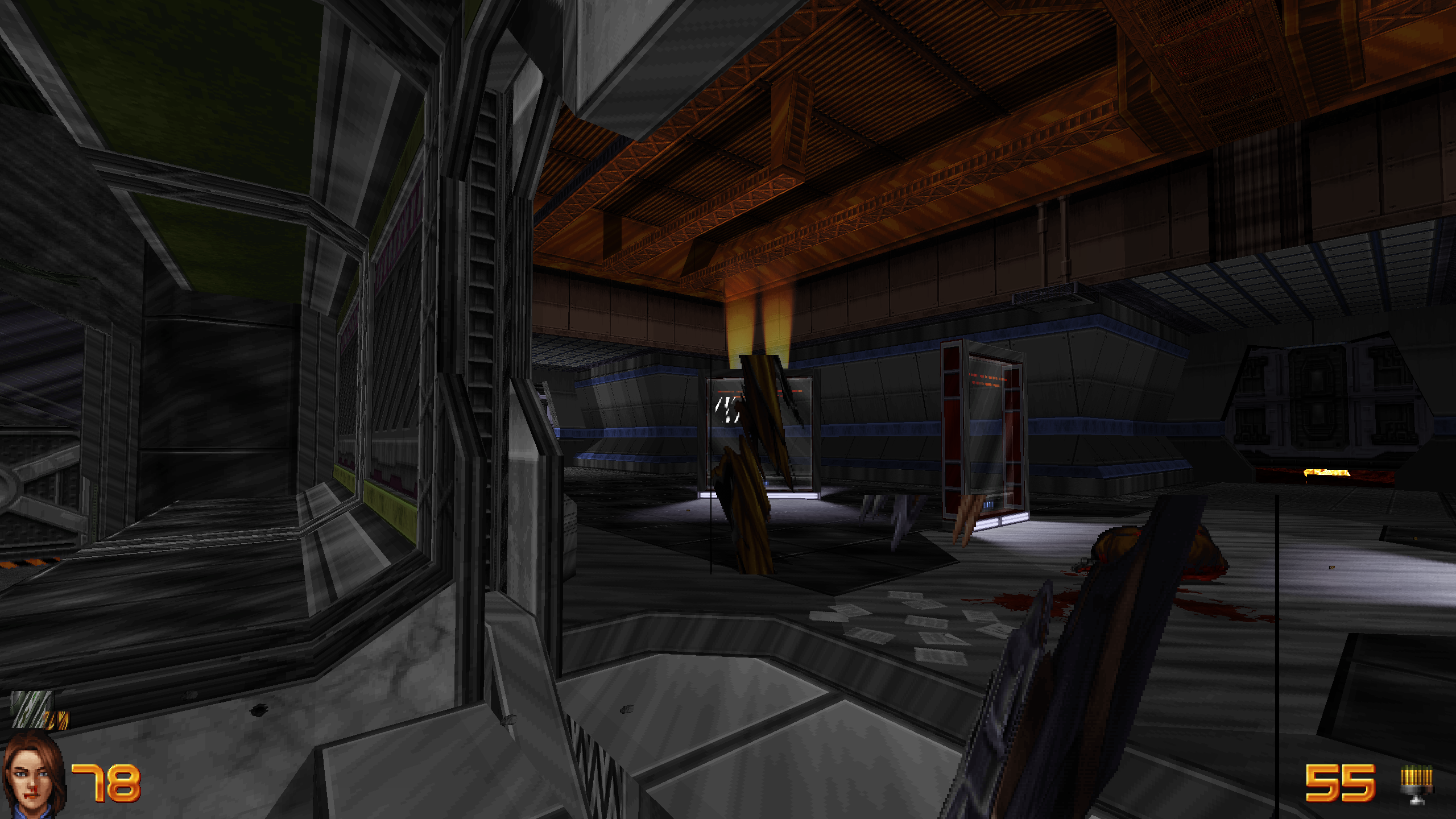 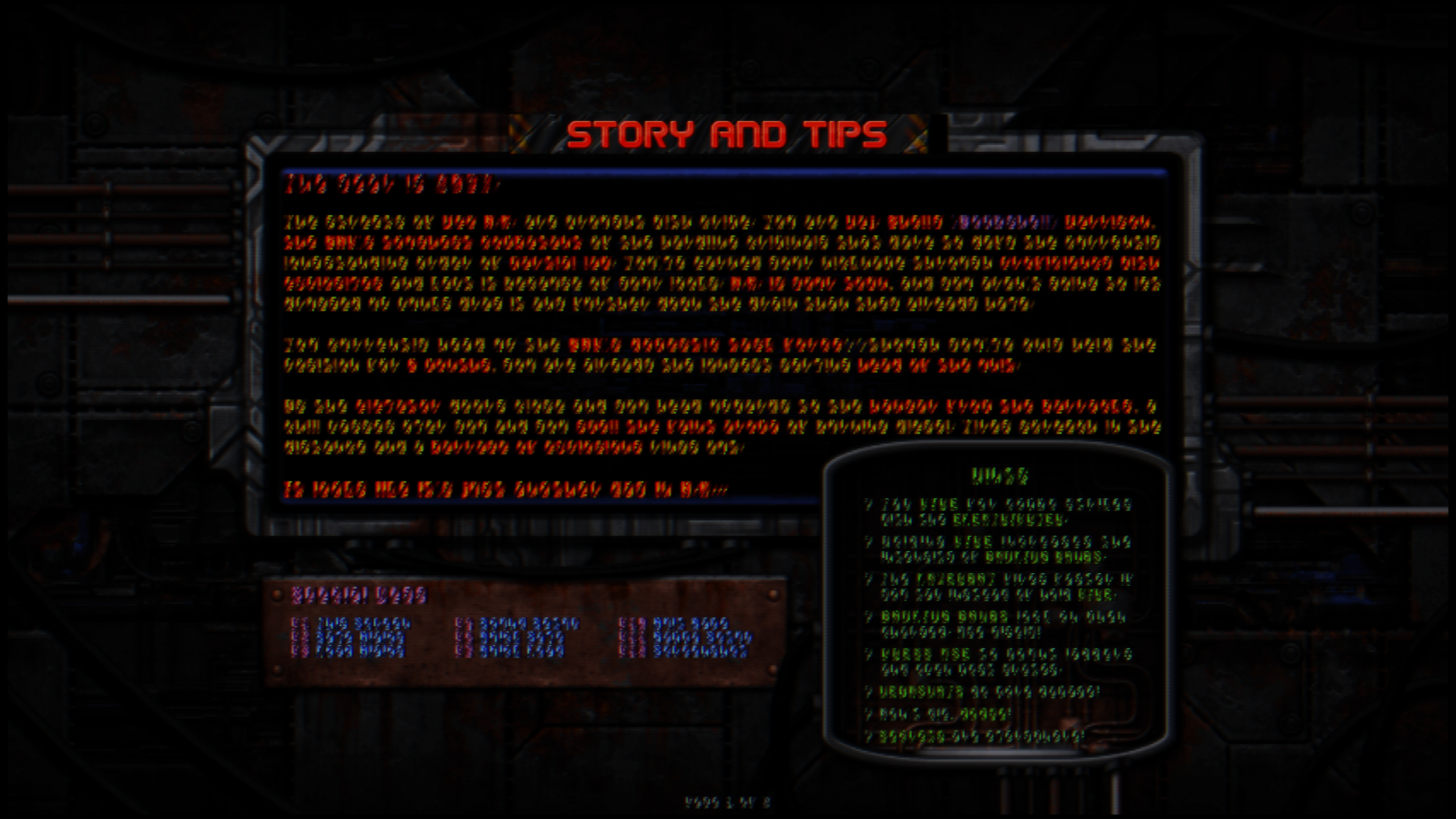 Other Screenshots of the issue: - imgur.com/a/4zUoWk8

It would be awesome to figure this out before the release of Ion Fury, up until now, I had assumed it would work correctly.

[EDIT] Forgot to mention: deleting or renaming the .dll fixes the issue for me, and I don't know why it persists for you (I didn't try Ion Maiden, my testing was all done on eduke32). I don't see how it could permanently alter the game, but you never know.

[EDIT2]Also, the issue only seems to happen when using the default and best setting of "classic" for the texture filter in the video options. Applying the blur filter fixes the issue, but makes the game unplayably ugly and blurry. Using filtered textures in polymer mode does not look anywhere as bad, and is the workaround I would recommend using for now, but some mods require polymost to function properly (like in my case) so this doesn't help everyone.

Now that we know it's related to texture filtering specifically, someone might have an idea on how to fix this.

[EDIT3] Well this will be one of the most edited post ever. Scratch most of what I said in EDIT 2, simply CHANGING the video mode and texture filter mode IN THE MENU will reset the sprites to what they should be. It seems like reshade is interfering with the game's launch, but changing those options will make it work totally fine as far as I can tell. Navigating the menu without text can be kinda hard if you don't know the menu by heart like I do, but you could launch the game without reshade, write down the steps etc... I assume everything I've just said also applies to ion fury, so although it may be a bit of pain, it should all work as expected when the game releases next week.
Last edit: 2 years 9 months ago by themaxmeister.
The following user(s) said Thank You: SamHammich

Less More
2 years 9 months ago - 2 years 9 months ago #3 by brazzjazz
Replied by brazzjazz on topic eduke32 Build Engine text+sprite draw issue
Same here, with EDuke32. Changing the video mode actually only fixes most of the menu text, but not the sprites in-game for me. That is, with the Polymost renderer. With the "Polymer" renderer enabled, ReShade does not load at all (I did prefer the Polymost renderer though last time, for some reason).

EDIT: seems like crosire pointed out the problem on the other thread: reshade.me/forum/troubleshooting/5707-te...opengl-game-ion-fury

Whaddayasay if we (four already) teamed up and everyone takes like 50 or 100 and checks them through?

EDIT 2: oh well, what crosire said could actually mean that there could be several numbers to be reserved since far more than one texture is being used by the game..?

I think I've had the same issue in Half-Life (WON), where several different textures would glitch out when ReShade shaders were loaded. Thankfully I could fix the problem by only loading the shaders after startup. With EDuke32, the glitches appear even before loading any shaders.

Fun fact: this is how it looks in Half-Life:

Less More
2 years 8 months ago - 2 years 8 months ago #4 by themaxmeister
Replied by themaxmeister on topic eduke32 Build Engine text+sprite draw issue
Hmm, you must be having some other unrelated issue, because I played the entire game with reshade without a problem. The only difference I've noticed between eduke and Ion is that I'm not getting a depth buffer in eduke polymost, only polymer, whereas in Ion I have it in both modes. I think this is simply due to those two being different version (i don't think I was up to date on my eduke). I played all of Alien Armageddon's episodes last time I posted (used polymer through most episodes, then switched to polymost when polymer fundamentally couldn't keep up with the more complex levels), and I played through all of Ion Fury (polymost, polymer isn't well supported, and when I tried it it ran like ass). Both were played using depth effects (mainly adof).

Changing the video mode worked 100% of the time for me (always changed to classic, and back to what I want), the only other caveat being that the procedure has to be carried out every time the game loses focus, or if the reshade menu is opened. Doing either of these things can lead to some sprites breaking (usually the ones the player hasn't encountered in that play session yet, so it can take a while for the issue to show up). Those are the only two things that ever cause a sprite to break on my end.

Can you repost the images? Your hoster seems to have already deleted the pics... I use postimages.org. Thx

themaxmeister wrote:
Hmm, you must be having some other unrelated issue, because I played the entire game with reshade without a problem.
[EDIT]
eduke

Very strange that it works for you. I bought Ion Fury a couple of days ago, and exactly the same problem. Very frustrating as I'd love to have ReShade with Ion Fury. Not even changing video mode does resolve the problem, and if it does, it's only until the next previously unloaded texture comes around. Do you have an AMD card or something? I'm gonna update my drivers, but since my driver is newer than your post, I have hardly any hopes. :-/

1. What did you rename the DLL to? You mean ReShade's DLL? It doesn't get picked up with me except when it's named opengl32.dll...

2. How is it going with the base game of Ion Fury now? It sounded like you were running Ion Fury through EDuke32??

I also mentioned the bug in the game's Discord channel, let's see whether it leads anywhere.
Last edit: 2 years 6 months ago by brazzjazz.

From the patch notes: Fixed OpenGL states not being restored during texture upload, which caused texture artifacts in some games