Less More
3 months 3 weeks ago - 1 month 1 week ago #1 by crosire
5.0 was created by crosire
It's finally ready. ReShade 5.0 is a major rewrite of the underlying architecture (again, yay), for improved performance, easier maintenance and future feature additions and most importantly, an all new, extremely powerful add-on API. Note that even though ReShade went through a lot of changes in the background, as a user you don't have to worry, as everything still works the same as before, just better.

The add-on API makes it possible to modify/extend both ReShade and the games it is loaded into. It abstracts away differences between the various graphics API ReShade supports (Direct3D 9/10/11/12, OpenGL and Vulkan), to make it possible to write add-ons that work across a wide range of applications, regardless of the graphics API they use. For more information, see the documentation at crosire.github.io/reshade-docs/index.html. It can e.g. be used to implement a generic TexMod, shader replacement, game-specific add-ons that provide game information to effects, special overlays/widgets for effects, more information in the on-screen display and so on, your imagination is the limit.

Example of an add-on that displays all the textures used in a game in an overlay : 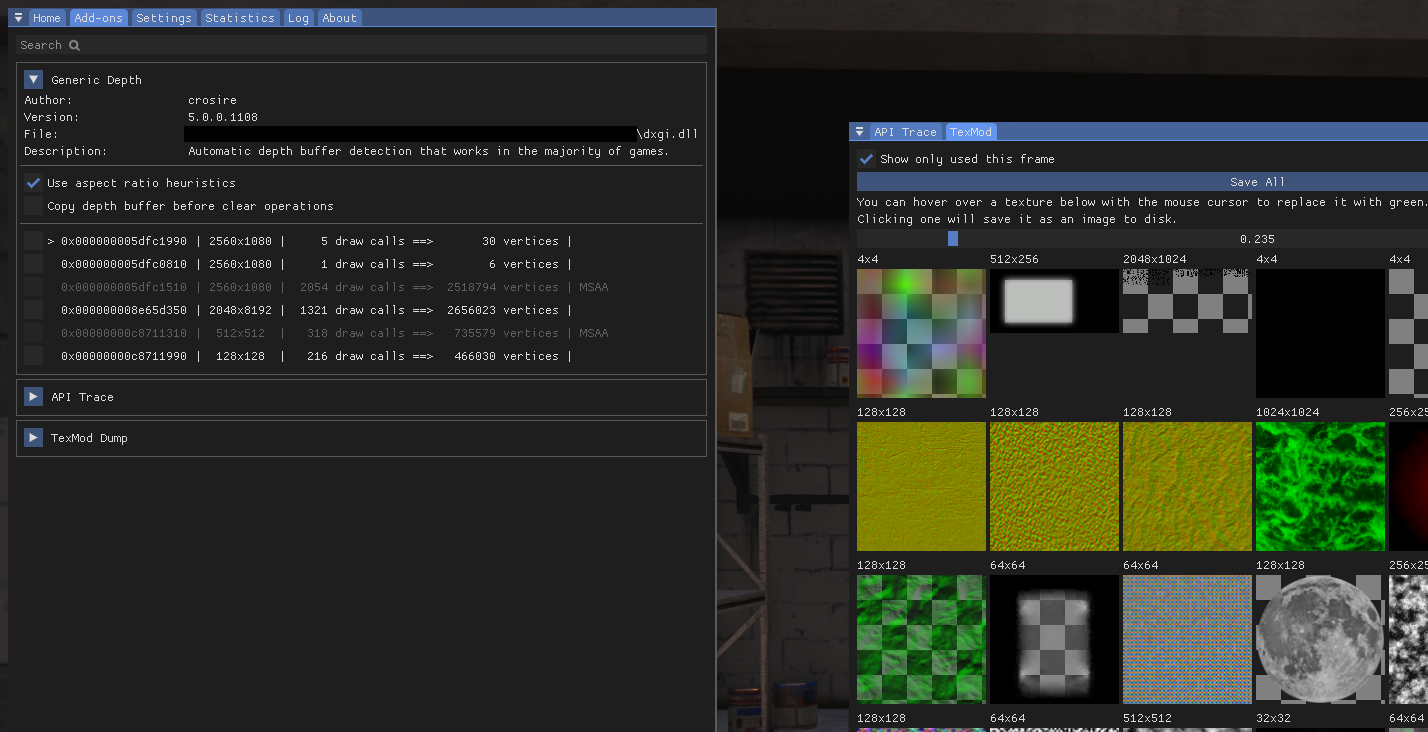 Since this is an extremely powerful API, there is potential for abuse, so the main ReShade release with signed binaries has add-on support mostly disabled to ensure it continues to be safe to use in multiplayer games! It does not allow loading add-ons and internally only hooks a very limited set of graphics API functions, just enough to make the built-in depth buffer detection work in singleplayer games still. When it detects a multiplayer game, this too is disabled completely, like before.
However, to still make the add-on API available, there is now a separate ReShade release with full add-on support that is not whitelisted by anti-cheat providers and therefore is to be used with singleplayer games only. Download link at the bottom of this post. This build does not do any multiplayer detection to disable features (but as said, using it in multiplayer games may cause bans!). The setup tools for the two different releases have a color-coded user interface to make the distinction clear.

In addition, this marks the first release with VR support for games using SteamVR. ReShade creates a separate effect runtime for VR, so you can configure different effects for what is displayed on the monitor to what is displayed in the VR headset. Even better, the VR instance can be configured right inside VR, using your existing VR controllers! Simply open up the SteamVR dashboard in-game and select the ReShade icon to be presented with the ReShade overlay. 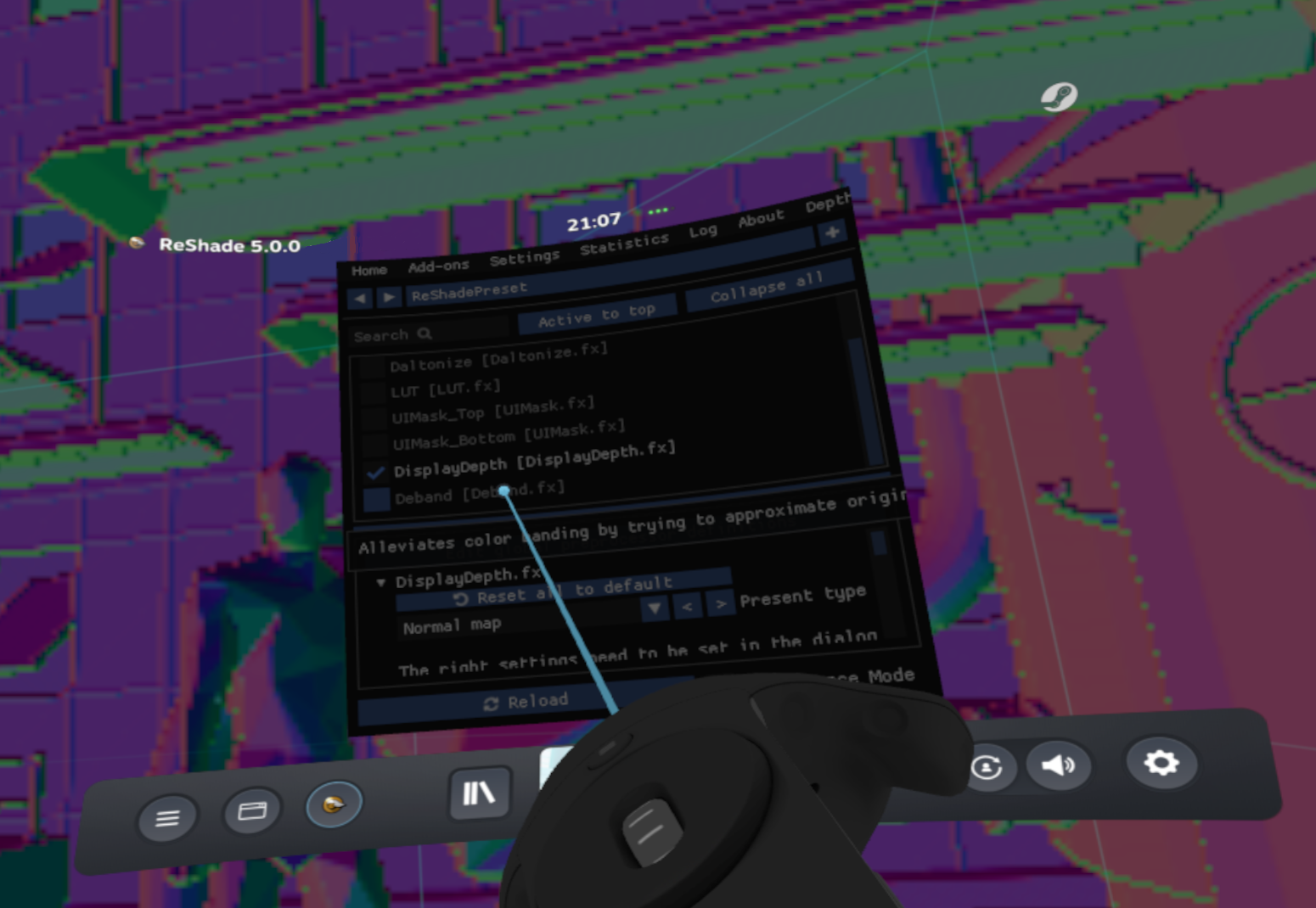 Last edit: 1 month 1 week ago by crosire. Reason: Removed 5.0 download links, in favor of 5.1 being available.
The following user(s) said Thank You: Wicked Sick, Pondural, sajittarius, brussell, Martigen, crubino, Juguard, Echo, Tojkar, Viper_Joe and 26 other people also said thanks.
The topic has been locked.
Less More
3 months 2 weeks ago #2 by Birdy62
Replied by Birdy62 on topic 5.0
Hi Crosire and thank you for this new release,

I tried this new version on 4 games :
Far Cry 5 : no problem
The long Dark : no more 1 fps problem when a video is playing.. THANK YOU
Generation Zero : instant crash at launch..  Reverting to the 4.9.1 version solve the problem
Wolfenstein The new colossus : i haven't found the option "Enable/disable Reshade in Vulkan globally", so i am stucked in the 4.91 version

Thank you again for your work

The topic has been locked.
Less More
3 months 2 weeks ago #3 by SVillaF
Replied by SVillaF on topic 5.0
Honestly I haven't made deep tests, but just tried with GTAIV using Vulkan and the hook isn't going.
And I uninstalled the Global Vulkan of 4.9.1 version as you said.
I guess that DXVK is causing some incompatibility?

I try to access Reshade in X4 Foundations (Vulkan api) through Steam but can't get it to hook. 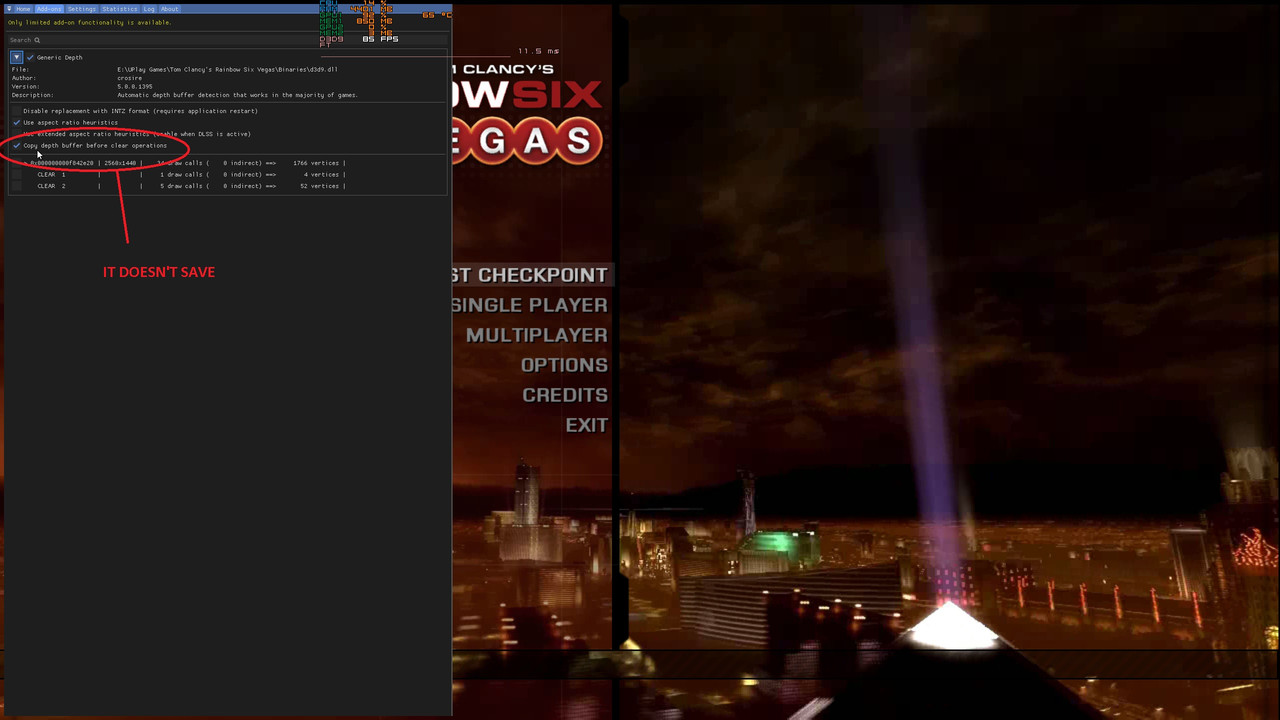 In the 5.0 version, I saw that even with(probably it does the same in a new instalation) the config file detection and/or updating, Reshade downloads ALL filters/effects of the selected packages I was using, which is terrible, since I only use a few from 3-4 packages, then I need to manually delete all fx files I dont use, its not viable, the list in the UI will be gigantic, and load/lists things unnecessarily.

Thank you Crosire for all you do, I use Reshade in 99% of games I play, since the first version(Sweetfx before that), its amazing!!

Edit: Damn, forgot to "ask" lol, please Crosire...tell me if I'm doing something wrong, or if you can put back the option to select individual effects from each package.
Last edit: 3 months 2 weeks ago by H..
The topic has been locked.
Less More
3 months 2 weeks ago #10 by Ragna89
Replied by Ragna89 on topic 5.0
Not sure if it was reshade or not since both reshade and BBCF got an update todaybut now in BlazBlue:Central Fiction activating post processing effects makes the game more and more pixelated despite not using any sweetfx shaders that should do that (curves, fakeHDR, lumasharpen, colormatrix, all of it makes it more blurry).
The topic has been locked.
Less More
3 months 2 weeks ago - 3 months 2 weeks ago #11 by ElClopitan
Replied by ElClopitan on topic 5.0
Not quite sure what you mean when you say:
`Warning: Uninstall any previous global ReShade installation before installing ReShade 5.0!!`
Specifically when you say global ReShade installation because vulkan doesn't seem to add any dll files and removing `reshade-shaders` from my game folder, unchecking  `Enable ReShade in Vulkan globally` in ReShade 4.9.1, and installing 5.0 with vulcan doesn't come up with any menu when I press home. Any ideas?
Last edit: 3 months 2 weeks ago by ElClopitan.
The topic has been locked.
Less More
3 months 2 weeks ago #12 by Niko of Death
Replied by Niko of Death on topic 5.0
Congrats on the release! Unfortunately, it seems some of the last few commits you made introduced some problems (as these issues were not present in my build from 1/24 - but are in both the official build, and my build from the latest master):
The note "(in fact I have yet to encouter a game where it doesn't work, after tinkering with the provided options)" led to me testing The Witcher and Max Payne, two games I had noted (reshade.me/forum/troubleshooting/7342-cu...d3d9-broken?start=20) as having regressed from 4.9.1 from having working depth buffers to not (and were still not working as of said 1/24 build). Now I can't even test if there is a working depth buffer for those two games or not, because enabling any effects (even just say, smaa) just gives me a black screen. The next game I tried to see if it was a problem with d3d9 as a whole was Pathologic Classic HD, which did have working effects, but had some weird bug where each effect added would further move the viewport down and to the right (as illustrated with these screenshots - first is no effects enabled, second is 3 effects enabled, third is 10 or so enabled) imgur.com/a/0ziJM6A (should additionally note that this problem also does not occur with the 1/24 build). Finally I tried Mirrors Edge, which didn't exhibit either of the two aforementioned problems, so it's not all d3d9 games that are broken.
Finally, you mention that vulkan can now be installed both globally and per game, but the setup tool doesn't seem to provide any way to do global installation anymore.
Also, not exactly a bug, but probably not the best behavior - Existing reshade.ini's, when 5.0 is installed, have the "FileNaming" key default to just "0", which causes every single screenshot to be named "0" (and thus get overwritten), rather than defaulting to "FileNaming=%AppName% %Date% %Time%"
The topic has been locked.
Less More
3 months 2 weeks ago - 3 months 2 weeks ago #13 by Aztec2012
Replied by Aztec2012 on topic 5.0
Cant install 5.0 to games with directx below 9 (8 and etc) with DGVOODOO wrapper to dx11 because after selecting exe files of these games "next" button is not active. 4.9.1 works fine.

For me, only Total War Warhammer 2 works using version 5.0. Stalker Shadow of Chernobyl (d3dx9) is completely broken by the new implementation, however. Enabling any shader breaks the graphic rendering. The only vulkan game I was able to test was X4 Foundations, but the hook does not seem to work. Strangely, uninstalling 5.0 and reinstalling 4.9.1 does not work anymore for this game alone. 5.0 somehow broke 4.9.1 for this particular game on my side (and that is after properly uninstalling it).
The topic has been locked.
Less More
3 months 2 weeks ago #15 by DeathWrench
Replied by DeathWrench on topic 5.0
There's some effects missing from 5.0
AdaptiveSharpen
FilmicPass
Colorfulness
Just to name a few. They work fine with 5.0. But arent included in the installer as they were in 4.9.1. Is this by design? I use these a bit and it will make things tedious by having to organize them all. Like say i run 4.9.1 and then 5.0 installers, there will be duplicate shaders in sub folders and what not.
The topic has been locked.
Less More
3 months 2 weeks ago - 3 months 2 weeks ago #16 by tOXicSilence
Replied by tOXicSilence on topic 5.0
Thank you for another outstanding release!

I'm still having trouble with The Last Campfire. Unity, OpenGL. There is a depth buffer with the correct resolution, but it doesn't seem to contain any depth information.

Appreciate all the hard work you and the team have put into this incredible tool!
Last edit: 3 months 2 weeks ago by tOXicSilence.
The topic has been locked.
Less More
3 months 2 weeks ago #17 by 0zzyt0
Replied by 0zzyt0 on topic Error on Reshade 5.0
When I try to run Star Citizen, I get the following error, because it is detected by Easy AntiCheat. Which with version 4.9.1 of Reshade had no problems. I don't know what is wrong or what file creates conflict, according to the Message it says:

"An unsupported graphics card has been detected. If you keep Running the game, you may experience unexpected effects or the program may stop working. Please check the manual for more information about system requirements.

I will find the version that does not disable support for multiplayer games to be very useful, and I'm incredibly excited (no, not like that) about the VR support! That's fantastic to hear.
The topic has been locked.
Less More
3 months 2 weeks ago #20 by crubino
Replied by crubino on topic 5.0
Thank you soooo much for made my dream come true!
SteamVR (OpenVR/OpenXR) supported make me so happy.
Let's make rains! Wohooooooooooooo! =))

Love you so much guys!
The topic has been locked.
Powered by Kunena Forum